Chrome Hearts is sending a message to companies that are making use of certain, stylized horseshoes and Celtic crosses: Don’t. After filing a trademark infringement lawsuit against Fashion Nova late last week, a handful of similar suits this spring (including a since-settle case against fast fashion streetwear brand MNML and one against “edgy” womenswear brand Dolls Kill), Chrome Hearts initiated a handful of new trademark infringement cases on Tuesday, this time targeting the likes of Macy’s, J.C. Penney, and Sears, among others.

In seven newly-filed cases lodged with the U.S. District Court for the Central District of California, Chrome Hearts points to various Celtic cross and horseshoe-bearing jewelry items and garments that are being offered up by Macy’s, J.C. Penney, and Sears, as well as online retailers Biker Nation, S.O.I. Tee, Rap Tee, and Blue Apple Jewelry, and claims that they are using “marks [are] confusingly similar” to its own trademarks, thereby, giving rise to claims of federal and common law trademark infringement, false designation of origin, and unfair competition.According to the seven almost-identical complaints, Hollywood-based Chrome Hearts claims that the respective defendants are marketing and selling goods that bear marks that are “identical and/or confusingly similar” to its “famous” trademarks in order to “cause confusion, or to cause mistake, or to deceive” consumers as to the origin of the products or a potential affiliation with Chrome Hearts “all to the detriment of Chrome Hearts.” In short: it claims that the defendants are selling products with lookalike marks in order to benefit from the established appeal of the Chrome Hearts brand.In terms of its stylized horseshoe and cross marks, Chrome Hearts argues that as a result of its “long use [on garments and accessories, such as jewelry], extensive sales, and significant advertising and promotional activities, [these marks] have achieved widespread acceptance and recognition amongst the consuming public and trade throughout the United States.” To be exact, Chrome Hearts asserts that it “spends on average over $1 million per year on advertising, promoting, and marketing” its brand, and since it launched in 1988, it “has sold over a billion dollars’ worth of clothing, all bearing one or more of the Chrome Hearts trademarks.” 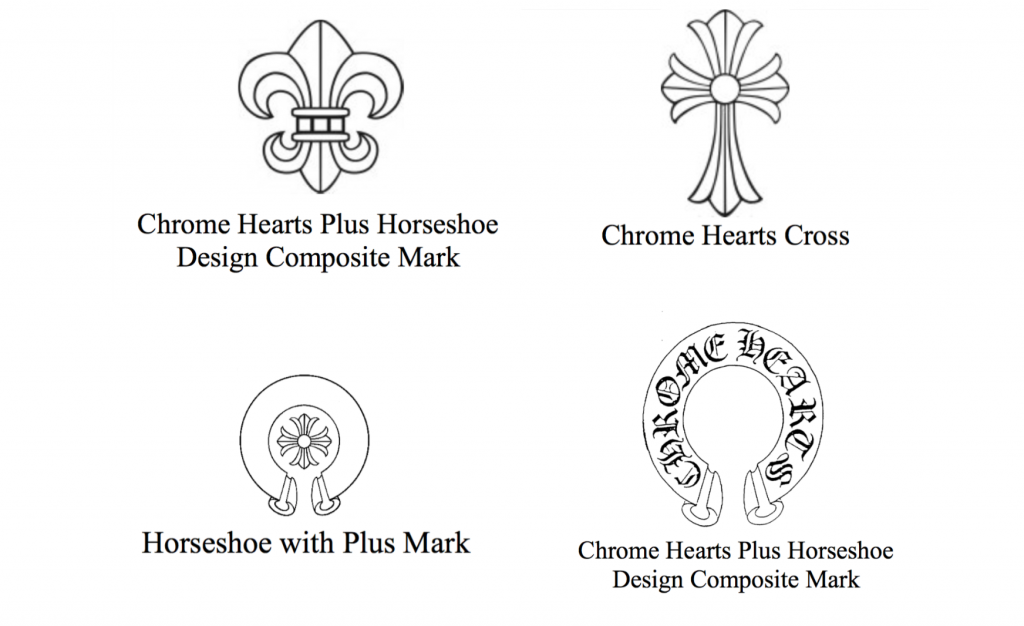 Against this background, Chrome Hearts claims that is entitled to injunctive relief to prohibit the defendant brands from using “any of [its] trademarks, and/or any marks identical and/or confusingly similar thereto,” and to recover “all damages, including attorneys’ fees, that [it] has sustained and will sustain as a result of such infringing acts, and all gains, profits and advantages obtained by the defendants.”

A Onslaught of EnforcementWhile Chrome Hearts has routinely policed unauthorized uses of its marks over the years by way of litigation, the newly-filed cases seem to indicate a ramp-up of enforcement efforts by the brand. Interestingly (although probably not surprisingly), this rise in trademark infringement filings coincides with something of a surge in more mainstream popularity of the brand, which got its start in the late 1980s when Richard Stark and leather manufacturer John Bowman launched the brand out of a garage in Los Angeles and began offering up leather biker jackets and fleur-de-lis silver jewelry. Since then, the company, now in the hands of Stark and his wife Laurie Lynn, has morphed into a “luxury lifestyle purveyor of handcrafted $165 Gothic lettered logo t-shirts; $1,750 cross-shaped leather patched vintage denim; $1,490 sterling silver truffle shavers; $169,000 ebony dining tables; custom car interiors, and more for the f–k-you money set – Elton John, Cher, Kanye, Rihanna, Guns N’ Roses and Ozzy Osbourne among them,” as Booth Moore so aptly put it late last year.With decades of cult clout at play, and a path that has seen the company shy from the mainstream merch route (“I mean, [we] could grow the t-shirts [business], and have everyone in the world wearing them, but we want to control what we make,” Laurie Lynn said in last year), Chrome Hearts is currently in the midst of a new phase of growth and appeal, particularly as “the Stark children – Jesse Jo, 28, a rock-‘n’-roll singer and the company vice president, and still-in-school 16-year-old twins Frankie Belle and Kristian – bring the next generation into stores through collaborations, their entrepreneurial spirit and social media [prowess].”The burgeoning demand for the brand among millennial consumers and co., which is largely due to a number of relatively new initiatives, including collaborations with Virgil Abloh, supermodel Bella Hadid, and Converse, a unisex fragrance collection, and a larger push into e-commerce (having all but shunned until the very recent past), as well as continued adoption of the brands’ wares by big-name celebrities, from Drake and Travis Scott to Kylie Jenner and half-sister Kim Kardashian. It is inevitable that such a robust rise comes with a whole slew of alleged infringements that need to be tackled.The cases are Chrome Hearts LLC v. Macy’s Inc., 2:20-cv-07238 (C.D.Cal.); Chrome Hearts v. S.O.I. Tee et al, 2:20-cv-07239 (C.D.Cal.); Chrome Hearts v. Rap Tee et al, 2:20-cv-07235 (C.D.Cal.); Chrome Hearts v. Biker Nation, 2:20-cv-07231 (C.D.Cal.); Chrome Hearts v. Sears, 2:20-cv-07227 (C.D.Cal.); Chrome Hearts v. Blue Apple Jewelry, 2:20-cv-07234 (C.D.Cal.); and Chrome Hearts v. JC Penny, 2:20-cv-07213 (C.D.Cal.).